There’s a growing tendency in user interfaces to move to a “design aesthetic” rather than actually having something that actually works for the user. You know the sort of thing I mean. Metro, for example, which has made a pig’s ear of using my Xbox 360, and by most accounts has done the same thing for Windows. More and more functions are added, with the useful stuff buried deeper and deeper and more and more difficult to find. Instead of functionality the interface is replaced with stuff that “looks good”, as if that’s more important than being able to use it. I know why it happens. I went to journalism school for two years, and in that time we were taught a lot of the normative practices of journalism, a few old saws that got passed down from generation to generation. One of these was “people first, events second, ideas third”. This particular pearl of wisdom is why, whenever you see an article about some amazing scientific discovery, the article focuses on the life of the scientist making it. The reasoning is that people won’t be drawn in if you talk about the discovery, only if you talk about the person. This reasoning is why Horizon is far worse than it used to be, because you have a whole swathe of bollocks to sit through before you actually learn anything. There’s also a tendency to make vague generalisations about the subject matter first. I have a rule, that if a documentary hasn’t told me anything new by 7 minutes in, I turn it off. Pretty consistently this seems to work. Seven minutes of waffle, then bam some interesting fact. It’s as if they believe that if they shock us with information too early on it will damage our systems or something.

The thing is, there is no evidence for this as a rule. In fact, if you ask anyone in the audience they would put the relative importance of people, events, ideas in the reverse order. It is just that someone once made this up, and in a profession where people are desperate for a clue about how to do it well, people cling to it as a fact. It’s also why we have  the concept of “learning styles” in education and “digital natives” in elearning.

Designers seem to work from a similar set of principles that have just been pulled out of  <edit> thin air. </edit>. Resistance to the introduction of the newer interface, which is “cleaner” or “more aesthetic” or “gui driven” is just dismissed as the user not liking change. Well, to some extent, sticking with what exists is important. The whole point of interfaces is that they become transparent through frequent use, and this supports a sense of immersion. You mess with them and suddenly they become visible again and therefore less usable. You have to be really sure something is an improvement before you mess with it.

What is tricky too is showing why the new one is worse, because so often the upgrade is done without any foreknowledge, so it’s not possible to make a comparison. However, the BBC iplayer has had both the new version and the old version side-by-side for a while, so it’s possible to screen grab both and demonstrate why the new one is so poor. So here goes.

This is the landing page for the old iplayer. 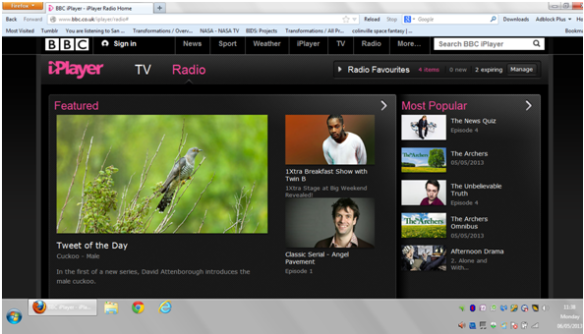 You can see immediately several radio programmes to listen to, in a variety of categories. If you see one you like you can click on it, and within a few seconds are listening to something. So for me, the Unbelievable Truth would do it if I hadn’t already heard it. so … click on that and done. 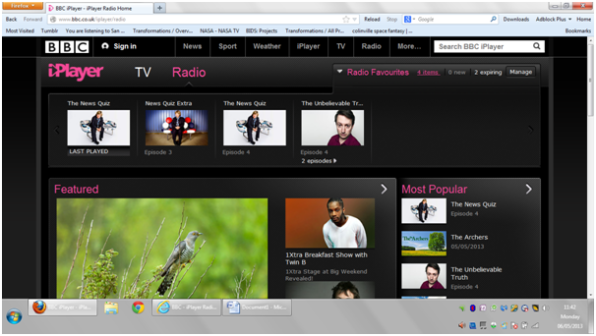 Ah OK — heard all of those so go deeper into the website, which you can do by scrolling down. In theory people don’t like doing this, but where is the evidence? 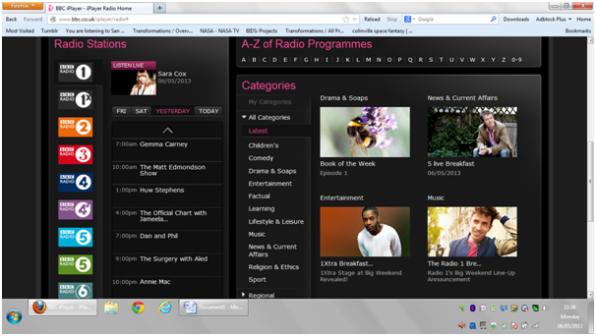 What’s great about this is that you can see the top selections from a variety of categories, which might lead you in a direction you hadn’t otherwise considered. Nothing there takes my fancy so I’ll head onto comedy and select that.

Well that should be enough choice. Round the Horne is pretty bona. However, if not then click on show all comedy and you have the entire list in alphabetical order. 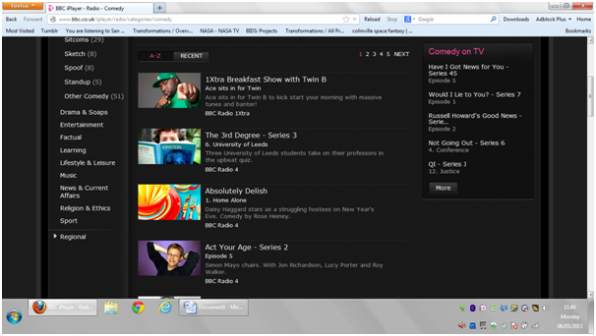 So there you have it. Nice, straightforward and fast.

Here’s the landing page of the new interface: 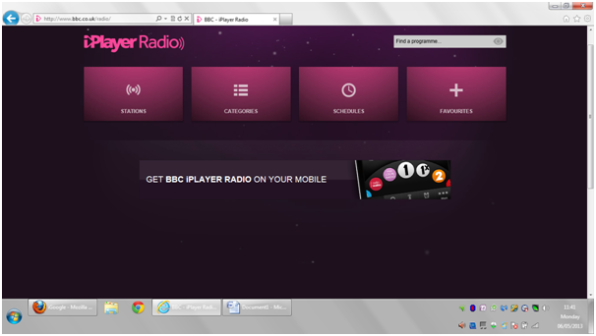 You can immediately see the problem. Someone with a “design aesthetic” has been let loose. There is a lot of empty space which contains no information, and seems to be there just to look good. There are no links to actual programmes. We are forced to select a search strategy to find a programme two of which are meaningless. I mean who cares what station or what time of day it’s on?

So after a completely pointless and confusing click on “categories” we get to this :

And as you can see STILL NO LINKS TO PROGRAMMES. It’s another superfluous click on comedy to get to:

We can scroll down to see programmes but they’re not in any type of order. The only real advantage of the new interface is that it enables filtering by sub-genre. It needs one more click to get the alphabetical list:

Which also for some reason includes programmes which aren’t available. Is anyone actually thinking through this at all?

And yet with all the extra clicks, this is meant to be “simpler” … the assumptions seem to be that we are children who like big clear pictures with plenty of colour and not too much information at once. Reading is too hard for us. We know exactly what we want to search for (the opportunities for serendipitously discovering stuff are eliminated) and we have time to randomly click on things to discover content. None of these things are true and I resent the implication.

For the moment both are running side by side and this is fine. Maybe some people prefer the new version. But anyone who has let the designers loose on their interface ought to give people the option. For example the latest version of Firestorm (a virtual worlds viewer) has the option to switch between Firestorm (a gui-driven interface) and Phoenix (a text driven one). Not all of us rate aesthetics above speed of access to information and not everyone needs bright colours, or curved edges, or little animations in their interfaces. In fact, they’re distracting and annoying.

Why the rant? I suspect you’re wondering. It’s because I can see the online world becoming less and less usable as a result of designers being let loose on things, and either not consulting, or deliberately ignoring the user feedback, as if we’re too uneducated in “design” to know what we want. I had a huge argument with a colleague who said that a change had been made to something he’d been working on because people prefer GUI to text. “No they don’t” I replied. He just said that “yes they do”. My response: “Maybe most people prefer it, but by saying ‘people’ you’re implying that all do, and I know that’s not true because I don’t”. The result? He completely ignored the point I was making, possibly because I wasn’t a designer and so therefore wasn’t capable of making a proper judgment about what I liked. Unfortunately if no-one creating interfaces listens, the online world will become less usable. I no longer access videos on my xbox, because the user interface is messed up. I use Twitter much less because the interface is unwieldy. wordpress is another good example. WTF does that w in a circle mean really? Could they not put “menu” there or something? I was using WordPress for months before i realised I could access my Reader or Freshly Pressed by clicking on it. Bit by bit I can see the gradual disenfranchisement of the user as control over how the online world is accessed is ceded to “designers” and I’d quite like it to stop.